This article is available in french

Summary: The purpose of this article is to outline four types of homelessness situations experienced by Indigenous people in urban areas in order to provoke a more nuanced reflection on this precarious situation. The subject of homelessness, while always a subject worthy of reflection, is particularly poignant when considered in the context of the curfew in effect in Quebec. The death of an Inuit man, Mr. Raphaël André, on January 20th as a result of the curfew, represents a sad example of how the curfew makes the precariousness of the homelessness situation even more salient. Therefore, the text describes the housing crisis that touches Indigenous communities across Canada, particularly since the 1990s. What follows is a more nuanced description of this reality according to a report conducted by the research groups ODENA and DIALOG. Lastly, we will conclude with a list of sources about homelessness and Indigenous homelessness in Canada, as well as a list of organizations working to improve the condition of those affected by these conditions.

As many people may have already heard, the recent curfew measure in Quebec has drawn attention regarding its implementation for the homeless people. More precisely, on January 20th, Marc Miller, Minister of Indigenous Services, commented on the death of an Inuit man found frozen in a chemical toilet in Montréal. His name was Raphaël André. This “heartbreaking death” has provoked anger and reaction from organizations that advocate for the rights of homeless individuals. As a result, the judge Chantal Masse of the Superior Court of Quebec suspended the application of curfew for homeless people on January 26.

According to a Radio-Canada article, “many homeless people, for a variety of reasons, did not access shelters or avoided them out of fear of contracting COVID-19. And they were hiding from the police to avoid being fined.” (Labbé 2021) [Freely translated] This is what happened to Raphaël André, who hid in a toilet 25 metres away from a shelter closed for renovation. This story raises a lot of questions. What resources are in place? What actions are federal, provincial, and municipal governments taking? How is COVID-19 affecting the homeless populations? These questions are numerous and have been addressed by many researchers. Unfortunately, a review of these studies would take too much space here. Nonetheless, we modestly take this opportunity to share some sources on these topics, to paint a portrait of the homeless situation in an Indigenous context, and to clarify some of the language used when looking at this particular situation. 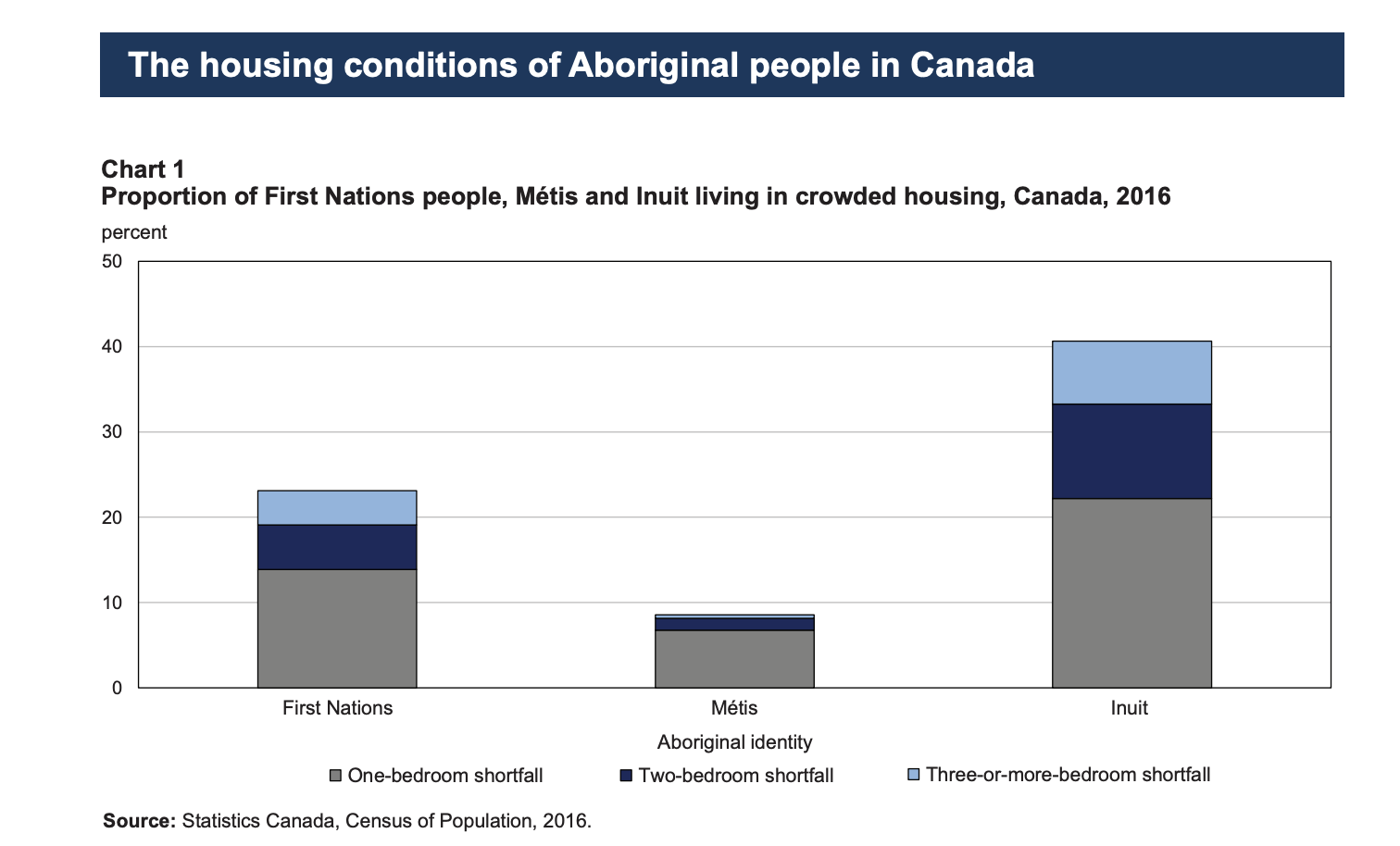 To begin with, we should note in the context of Raphaël André’s story that a housing crisis is affecting the Indigenous communities. According to Statistics Canada, 19.4% of the Indigenous population in Canada lived in housing that required major repairs in 2016, and 18.3% lived in a crowded housing in that same year (2017). Indeed, the housing resource is not to be taken for granted for our community programs. This housing crisis

plays a role in the dynamics of homelessness among the Indigenous people and communities. According to a report by ODENA and DIALOG, the precariousness of the housing situation was aggravated during the 1990s with the unprecedented increase of Indigenous presence in the cities, and the cuts in social housing and related services. This situation “has resulted in a significant increase in the number of First Nations people experiencing homeless across Canada.” (page 26) [Freely translated]

Homelessness should not be confused with nomadism or semi-nomadism, which is a lifestyle. Homelessness is the opposite of such a system that includes territory, economy, society and politics. It is experienced by isolated individuals, “and occurs primarily when the safety nets and social shields that form personal identity and family and group membership are no longer adequate for a multitude of reasons.” (page 20) [Freely translated]

As the ODENA and DIALOG report also mentions, the so-called traditional, or rather colonial, definitions of homelessness do not sufficiently cover the reality of these situations for the Indigenous people. In the Synthèse de l’Avis sur la réalité montréalaise des jeunes autochtones (Synthesis of the Opinion on the Montréal reality of Indigenous youth), published in spring 2016, the Conseil jeunesse de Montréal emphasizes the importance of paying attention to the Indigenous youth who end up on the street or in shelters. While this synthesis points to problems related to physical, mental and psychosocial health, details are still missing. This finding precedes the section of the ODENA and DIALOG report on the inadequacy of services to value culturally relevant approaches (page 40). We encourage reading this section, but for the time being, we will describe four types of situations that show homelessness realities specific to the Indigenous population.

This situation “refers to a multifactorial and multi-scalar state of deprivation that goes beyond not having a roof over one’s head or a place to live …’literal homelessness’ is not to be confused with ‘chronic homelessness’ which is normally referred to when referring to people who have been without a home for a significant period of time, and therefore is a long-term event. The difference with the literal homelessness is that the focus is entirely on the person, not just on their material condition.” (page 22) [Freely translated] Circular mobility: This situation is distinguished from the mobility that characterizes some communities, a mobility that is highly dependent on the territorial knowledge and social ties. A loss of social and personal references characterizes this situation. According to the report, “often at odds with their family and community environment, people leave their community head for the city, hoping to improve their condition or possibly escape it. After some time in the city, with no network, no money, no job, they return to their community, often because they have no other place to go, only to leave again shortly afterwards for the city.” (Lévesque and al., 2015a: 124) [Freely translated]

Hidden homelessness: Sometimes called couchsurfing, this situation refers, in literature, to a situation experienced by people who, not having their own home, live temporarily with friends or family members. (Distasio and al., 2005; Memmott and al., 2003) [Freely translated] According to the report, “while it can obviously be experienced by Non-Indigenous people, hidden homelessness has a different significance in an Indigenous context where the support of the extended family and social network remains a basic component of the value and support system that operates when one of its members faces difficulties.” (page 23) [Freely translated]

Spiritual homelessness: According to the report, “in the Indigenous thinking, home is much more than just housing: ’It is rooted in a vast territory punctuated by recognized sites, sacred places and memory events; it has cultural, emotional and narrative meaning for a group of individuals or a community. The more blurred or distant the connection to home, the less likely it is that identity issues can be addressed.’ […] If spiritual homelessness can be identified as a cause or an aggravating factor of literal homelessness [living on the streets], its consideration can, on the other hand, offer a protective shield in situations of risk, prevention, or even exit from the homeless condition.” (Lévesque and al. 2015a: 122) [Freely translated] To summarize, the complex system of rights, obligations and responsibilities, that is constituted by the relationship with the family, should be considered when thinking about the causes and consequences of not having a home for the Indigenous people. (page 24)

Lastly, we share a more robust definition of homelessness among the Indigenous population, from the report:

Indigenous homelessness is a human condition that describes First Nations, Métis, and Inuit individuals, families or communities lacking stable, permanent, appropriate housing, or the immediate prospect, means or ability to acquire such housing. Unlike the common colonialist definition of homelessness, Indigenous homelessness is not defined as lacking a structure of habitation; rather, it is more fully described and understood through a composite lens of Indigenous worldviews. These include: individuals, families and communities isolated from their relationship to the land, water, place, family, kin, each other, animals, cultures, languages and identities.

We feel, perhaps, uncomfortable when we become aware of this suffering. One wonders what actions are being taken, what actions can be taken? We see awareness as a first step. In this sense, here are some sources that might pique your curiosity as well as organizations that are fighting to improve the condition of homeless people.

Organizations in Montréal looking for volunteers and donations:

Please note: It is a good idea to ask up front which donations will be most relevant.

In some circumstances, some donations may be problematic. For example, Chez Doris, they ask that clothing and hygienic donations be reduced due to a lack of volunteers available to sort them out.